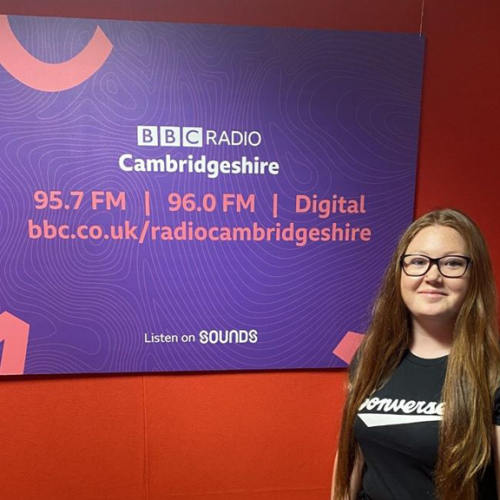 Annie, who also studied Level 3 Media and Journalism at Peterborough College, said that a college visit to local radio studios ignited her passion for the industry: “Previously, radio seemed like a niche profession that I’d need a specialist qualification to go into, but after the visit, I became determined that that was the field I wanted to pursue”.

Annie said that the job opportunity was “a dream come true” and continued, “it’s opened up so many doors for me. It’s such an amazing feeling to get my foot in the door with the BBC, and to know that all the effort I’ve put into my education is finally paying off”. Annie noted the benefits of the university’s small class sizes: “I get more in-class support and one-to-one time with tutors, which makes a massive difference when the assignments start piling up”. As a result of health issues, Annie experienced changes to her “life-path” whilst at college and university, but said, “I couldn’t have asked for more support!”. She continued, “All the tutors are understanding and easy to talk to, which makes dealing with the usual anxieties of student life, on top of my health issues, more bearable”.

Some of Annie’s responsibilities in her new role include answering phone calls from listeners and contributors and routing them through radio systems, carrying out research in support of journalists, and a range of production administration tasks, from logging music, to preparing scripts and running orders. Annie had plenty to say about how University Centre Peterborough prepared her for the new role: “The most valuable asset for me was the radio studio at Inspire Education Group’s Media & Journalism Centre. Being able to see the set-up and ‘play around’ with the equipment gave me plenty of experience before I went to the BBC radio station, making starting work far less daunting. I think University Centre Peterborough was the best place I could’ve gone to for university”.

November 18, 2022 After completing his A Level studies at nearby Hampton College, Nathan Long e...
Case Studies

Former Photography Student, Emily Colhoun, Visited Stamford College Earlier This Year To Deliver A Presentation Of Her Work To Students

November 9, 2022 “Inspire Education Group gave me the confidence to progress onto things I never could have dreamed...
Case Studies